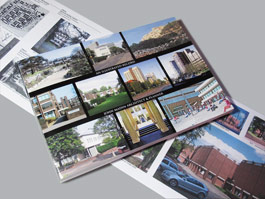 Note: To download in background, right-click images or links and choose Save Link As... / Save Target As... 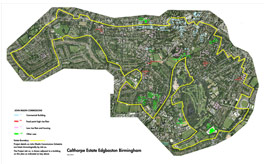 The Plan is based on a Google Map in Satellite view. John Madin's projects are identified by use type and by job number (refer to the Commissions Schedule below). 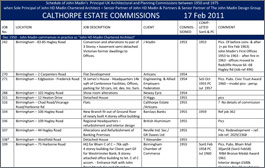 This commissions schedule is an evolving document and will be updated when new information becomes available; it was last updated on 17th February 2011.

1924-2012
This website’s purpose is to make available information on John Madin’s architectural and planning work, held in the Madin Archive, through the download of the 132 page e-book “John Madin - Architect & Planner - an illustrated record” and other supplementary downloads.

John Madin made a significant contribution to Birmingham’s recovery in the aftermath of the second world war, in particular he was responsible for the master plan for the redevelopment of the 1,625 acre Calthorpe Estate (1958) just to the west of the city centre and much of its subsequent implementation, and buildings within the city, such as the Birmingham Post and Mail, the Chamber of Commerce, the Central Library, BBC Pebble Mill and the Warwickshire Masonic Temple.

John Madin’s work, however, extends far beyond the bounds of Birmingham, including projects as diverse and far afield as the master plan for Telford new town, the Yorkshire Post and Mail Building, the radio and television complex (in association with Marconi) in Zagreb, and the Wardija Hill Top Village in Malta.

To help put John Madin’s work in context four brief initial chapters are included in the e-book “John Madin - Architect & Planner ”an illustrated record” ; Chapter 1 “introduction”; Chapter 2 “Early years and influences”; Chapter 3 “Birmingham in 1950” and Chapter 4 “Philosophy”, these refer to the extensive family records, John Madin’s “Birmingham School of Architecture” portfolio and the press cutting collection.  Chapter 5 “illustrated list of works” provides a chronological illustrated record of his principal works, including references to periodical and newspaper articles relevant to the particular project.  Chapter 6 “commissions by type” collates John Madin’s principal works in an easily referable form and has a reference to the page number in Chapter 5, where the project has been illustrated.

The Madin Archive has the commission records since John Madin set up in practice in 1950.  This has enabled placing projects in chronological order based on commissioning date.  In Chapter 5 “illustrated list of works” design records such as drawings, perspectives and model photographs are included, together with photographs of the completed project, and where available current ones representative of the original design.

The e-book is intended to be an evolving document and contributions of information, which will add to this record would be appreciated; in particular additional/better photographs of the buildings illustrated would be welcome, as well as of those projects that have not been included at present.  There is limited information in the Madin Archive in respect of private houses designed in the 1950’s and 1960’s, help to address this would be appreciated; as would photographs of buildings where alterations have occurred and a current photograph would not be representative of the building as designed; this applies in particular to the interiors.

Due to the extensive nature of the information available and the considerable number of projects undertaken; there has been subjective selection given to the projects included and the information used to represent a particular project.  However, the e-book does not provide analysis; its purpose is to supply information, which would not otherwise be readily available.  In chapters 1 to 4 of the e-book, there is reference to John Madin’s personal views or recollections; where these can be they are supported by reference to a published document or record held in the archive; where not and it is a personal recollection of John Madin or another person it is so stated.